Home » Navy Man Hurries To Greet Wife, But Sees Her Pregnant Belly And Realizes She Lied 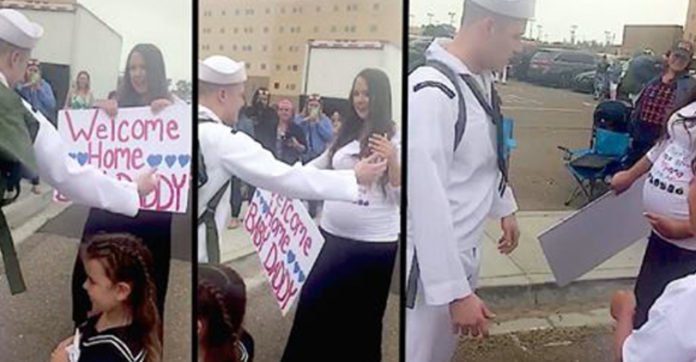 Navy Man Hurries To Greet Wife, But Sees Her Pregnant Belly And Realizes She Lied

Natasha found out she was pregnant (for the fourth time) one week after her husband, Chris Daugherty, a Naval Officer, was deployed to the western Pacific. Instead of calling Chris and telling him the exciting news, Natasha kept it a secret! She hid the growing baby bump in photos and never mentioned anything about the new baby when they Skyped.

I can only imagine how difficult that would have been to hide such fantastic news! Finally, in June 2017, Chris came home, and Natasha and the three other kids were waiting for him as he arrived. Natasha was holding a big sign over her belly, and when Chris got closer, she dropped the sign! Read the full story here ▶