Home » Grandpa Rushed To The Hospital To Meet His New Grandbaby. Moments Later He Learns His Daughter Lied

Grandpa Rushed To The Hospital To Meet His New Grandbaby. Moments Later He Learns His Daughter Lied

A grandfather got a wild surprise when he went to the hospital to meet the newest member of the family. Landry James has been the only male in the family for quite some time, with two sisters, four daughters, and two granddaughters. When one of his daughters, Carie Elbe, was pregnant, she had some life-changing news to share with her dad.

She didn’t tell him right away, however, holding on to the secret and finding the perfect time to share the news. 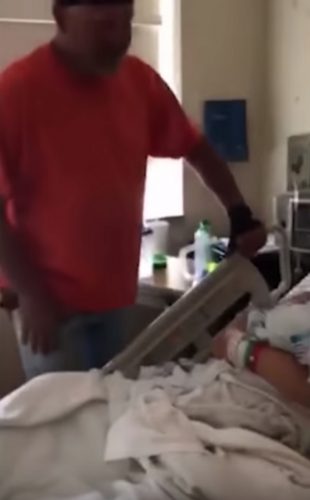 You see, Carie knew she was going to have a baby boy — so she kept that little detail a secret so she could deliver the surprise of a lifetime to her dad.

When the delivery day came, Carie’s family was on hand to celebrate. A video captured the moment her dad found out the gender reveal — and he couldn’t believe it!

The video starts with Grandpa Landry checking out the new baby, unaware that it’s not a little girl. Carie asks, “so what do you think of another baby girl?” He comments about the color of the baby’s hair and spends a moment appreciating this sweet new arrival. 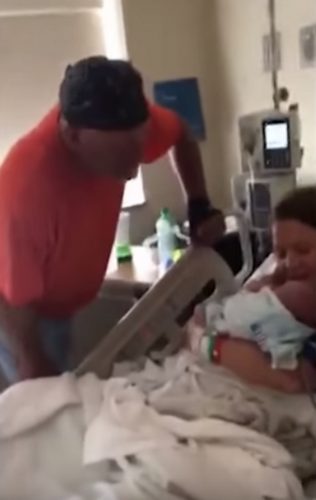 Then Carie begins to pull away the blanket to reveal the big surprise: a t-shirt that says “FYI: I’m a boy!”

Grandpa Landry doesn’t immediately take notice, but finally gets clued in, as you hear him say “a what?”

He still seems unsure, as Carie waits for the gender reveal to finally register, and he wonders why the baby is wearing the shirt. Carie explains “because it’s a boy.”

His reaction? “No way.” He’s still totally stunned, as she says his name is “Landry James.” 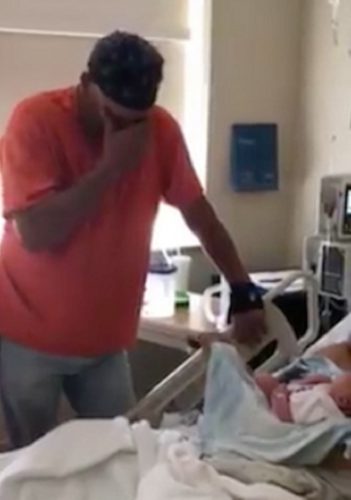 Grandpa finally is on board, calling everyone “brats” jokingly, then laughing and smiling about the amazing news.

How Carie kept this secret her entire pregnancy is admirable, considering he wanted to know the gender, but she never tipped him off to this unexpected surprise nor did the other family members who knew the secret.

Best of all, the baby was born on Grandpa Landry’s birthday!

The Caters Clips YouTube video explains: “This is the adorable moment a grandpa finds out his newest grandchild is actually a boy, after several generations of being the only male in the family. Meeting his third grandchild for the first time in Breese, Illinois, USA, James Patrick is about to receive an unforgettable gift on the morning of his 49th birthday.” 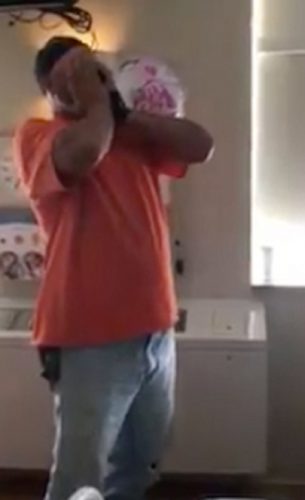 The description further notes: “After having two sisters, four daughters, and two granddaughters, James was resigned to being the only man in the family, after he had been told he was walking in to meet yet another girl, his third granddaughter.”

While many commenters weighed in with opinions on the YouTube video, one person explained why this was a big moment for the man: “He was excited for a boy after being the only male in the family for years. If the situation were reversed, and there were all boys, I’m sure he’d be excited for a girl. I’ve worked in labor & delivery for 34 years, and just because a parent expresses a desire for a specific gender, that doesn’t mean they don’t want a healthy baby of either gender nor does that make them a bad parent. They still are happy and love their children. You’re allowed to be excited about something that’s extra special to you or your family, without detracting from everyone else.”