Home » Boy Sweetly Performs ‘10,000 Hours’ As He Holds Newborn Brother With Down Syndrome

Boy Sweetly Performs ‘10,000 Hours’ As He Holds Newborn Brother With Down Syndrome

The Dan + Shay and Justin Bieber song “10,000 Hours” has likely never been performed as tenderly as during this rendition by little 6-year-old Rayce from Arkansas. The young singer used the famous tune to calm his little brother Tripp, who was born with Down syndrome. Doting mom Nicole Powell filmed the touching scene on her phone and uploaded it to Facebook in Jan. 2020, with the footage quickly going viral.

According to Good Morning America, Tripp was just six weeks old when the video was filmed and had just returned from the ICU. During his hospital stay, he was continually loved by his family, including Rayce, who would visit Tripp every day after school and tell him all about his daily tasks. According to Powell, they have had a strong bond since day one.

“From the minute (Tripp) was born, Rayce was like: ‘Hand me the baby,'” she told the publication. “Each day after school he would just talk and talk to Tripp, telling the baby all about his day.”

Each time the popular song would come on, Rayce would tell Tripp that the song was for him. The touching lyrics about spending 10,000 hours to get to know your heart are the perfect match for Rayce and Tripp’s special relationship, which is sure to continue into adulthood.

So when Powell caught Rayce singing the song on video, she knew that she had to post it online and share it to bring awareness to Down syndrome. Along with the video, Powell also worked to destigmatize Down syndrome. 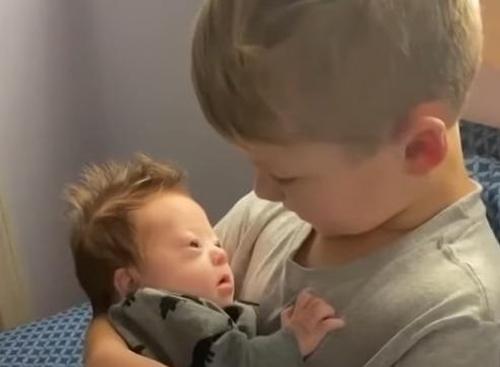 “Love doesn’t count chromosomes, or as Rayce says, ‘Aren’t we all different?'”

Powell admits to being scared when she first learned about the diagnosis when she was pregnant with Tripp. However, she said that all of her doubts completely disappeared when Tripp was born and she heard him cry for the first time. In a follow-up to the original post on Dec. 30, 2020, Powell urged expectant mothers to “not be afraid” of their baby’s Down syndrome diagnosis:

“To any expecting mother that receives the news that your unborn baby has Down syndrome, do not be scared like I was,” she wrote. “That baby will be such a gift to your family in so many ways and I promise his/her siblings will love them like no other!”

On Tripp’s birthday in November last year, Powell took to Facebook to share her experience of her youngest’s birth. It turns out that Tripp’s welcome to the world was not easy. Powell was on her way to a routine doctor’s appointment and quite late in her pregnancy, as she explains in her post. She mentions that she had already had problems carrying one of her other children to term, but everything had looked fine so far for her latest pregnancy. But then, during the checkup, the doctor’s reaction to something he saw caused her to worry. Seconds later, she learned that her fears were justified, as the doctor has some unfortunate and urgent news.

“He said, ‘I’ll be right back, let me go grab something.’ He goes back out, I looked over at JJ immediately and told him something was wrong, I just knew it. He walked back in with the nurse and checked again. They both looked at each other and looked at me. I remember instantly getting a lump in my throat. He said, ‘we have to go right now and get this little one out by c section’,” Powell shared.

The baby’s heart rate was dangerously low, which meant little Tripp had to “get out now.” Powell admitted the experience was terrifying.

“I remember still feeling Tripp kicking and not even caring if he had Down syndrome anymore I just wanted him to live,” she wrote.

“I remember saying ‘but is he okay?’ And as soon as I said that at 10:55am I heard the sweetest most purest softest cry I’ve ever heard. I’ve never cried with any of my babies (and I love all my babies to death) but his cry was like a sound I had needed to hear for so long to know it would be okay,” Powell continued.

Down syndrome is one of the most common genetic disorders worldwide. According to a 2010 study by the Department of Pediatrics in the Netherlands, an estimated 1 in 1,000 babies born each year worldwide suffers from Down syndrome. In the U.S., the National Drown Syndrome Society (NDSS) states that, according to the Centers for Disease Control and Prevention, 1 in 700 babies born each year suffers from it.