In Jersey City, a restaurant opened for business as usual. But the day was far from the norm as cops arrived at the restaurant by the afternoon hours and crowded around a small newborn baby with a portion of the umbilical cord still attached.

The El Patron restaurant’s owner, Frankie Aguilar, said things were pretty normal that day until a 14-year-old girl came into the establishment with a newborn baby in her arms. Frankie immediately felt something was off because she looked stunned and desperate for help.

“This lady comes in looking very desperate, holding a brand newborn child, you can even tell. She comes in, she looks at me in the eye, I look at her and she has these eyes of terror and despair,” Frankie said, as quoted by NBC New York.

The teenager claimed she found the newborn baby abandoned somewhere. 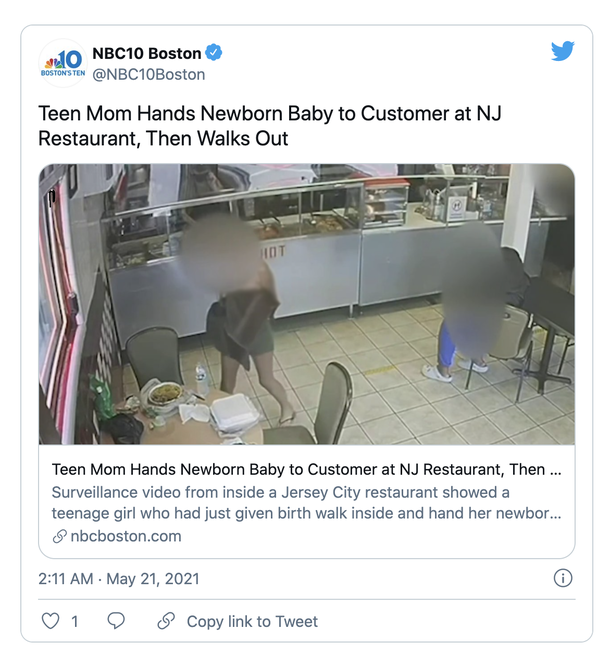 At the same time, a customer named Alease Scott and her boyfriend, Walter Cocca, were having lunch at the restaurant. Alease spotted the teenager carrying the baby in her arms and offered help.

“The baby wasn’t really moving that much. (The mother) went to the counter, she said she needed help,” Alease recalled. “I got up from the table, I immediately walked over to her and I said you mind if I check the baby’s vitals? So she readily handed the baby over to me. I noticed the baby still had matter on it from being born, in the hair and the ears. It wasn’t cleaned off very properly.”
It was clear to Alease that the newborn baby was struggling to breathe. So the former therapist and preschool teacher immediately tried to help the little one.

“I looked down and saw that there was dried blood on her leg, and I immediately said ‘Oh my God, this is the baby’s mom,'” Alease said. “But I was more focused on making sure the baby was breathing, so as soon as I looked down at the baby she was gone.” 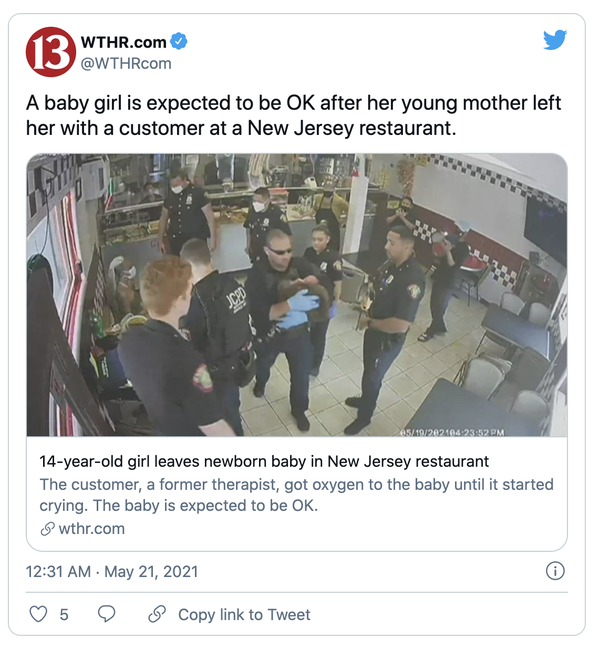 The teenage mother fled the scene while her newborn was in Alease’s arms. Thankfully, Alease was trained in CPR and first aid, and she was able to apply the oxygen mask onto the newborn baby.
“…All of a sudden we heard the most beautiful cry and the baby started moving, she slightly opened up her eyes and then she closed her eyes but the sweetest thing was when she got hungry and she was trying to suckle on the oxygen mask so we knew she was OK after that,” Alease recalled.Once first responders arrived, the baby was taken to the hospital and will eventually be put up for adoption. The police were also able to find the mother and reported that she is doing well and recovering, according to ABC7 New York.

While it certainly was no ordinary day at the restaurant, Frankie said he was glad the teenage mother walked into his joint and ultimately received the help she and her baby needed.

“Hopefully we as a society become better at just helping one another,” Frankie said.