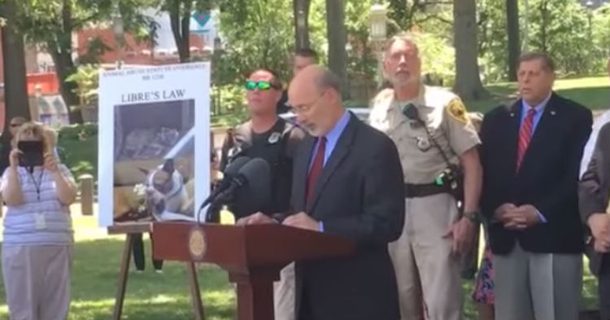 When an adorable Boston terrier was found sick and abused, the Pennsylvania government something had to be done. Since the dog was treated horribly at an animal breeding center, he was an example of many animals that are abused at breeding centers in Pennsylvania.

This is when Governor Tom Wolf knew a change needed to be enacted. Animals in PA were being mistreated while in other states, they were being protected. That’s when Gov. Wolf decided to sign a bill that will forever protect animals and the way breeders treat these sweet animals.

In an effort to bring awareness and change to this horrible situation across the state of Pennsylvania, Governor Wolf stood before a crowd on the state Capitol lawn to speak on new bill in front of him and signed it right then and there. Read the full article here ▶