Home » Oh No, Nancy Reagan Will Absolutely Not Be Getting An ‘AIDS Activist’ Edit

Oh No, Nancy Reagan Will Absolutely Not Be Getting An ‘AIDS Activist’ Edit

“CBS Sunday Morning” is fluff. It’s meant to be fluff. You’re supposed to half watch it while half asleep and getting coffee on a Sunday and without ending up in any kind of serious discussion with whoever else happens to be in the kitchen. This is understood. It’s not a serious, hard-hitting news show, and it’s not meant to be. That’s fine.

It would even be fine that they did a segment today on “The Devotion of Nancy Reagan,” no matter how pukey that sounds, if it were not made entirely of lies, if it focused on things that were true about Nancy Reagan and didn’t paint her as a hero to those with HIV and AIDS.

In an interview with Lesley Stahl (who should know better than this), Washington Post columnist Karen Tumulty, who recently published a book titled The Triumph of Nancy Reagan, painted a picture of the former First Lady as a secret behind-the-scenes force for goodness in her husband’s administration — most notably concerning the AIDS epidemic.

After the death of actor Rock Hudson, she persuaded the president – after six years of silence – to make his first big public speech before the AIDS Research Foundation chaired by Elizabeth Taylor. But she worried that the regular White House speechwriters were too ideological.

“She’s afraid if the White House writes the speech, it’s gonna come off as too harsh, that, you know, a lot people and the Reagan administration didn’t really see AIDS as a health crisis, they saw it as a moral crisis,” Tumulty said. “So, she goes out and recruits the speechwriter who will write the speech.”

“This is a battle against disease, not against our fellow Americans,” President Reagan said. “We mustn’t allow those with the AIDS virus to suffer discrimination.”‘

The first AIDS diagnosis in the United States was in 1981. By May of 1987, when the Reagans deigned to open their mouths about it, over a million Americans had contracted the virus. More than 25,000 people had died from it. Their silence literally caused the deaths of untold numbers of people.

It also deserves mentioning that the letter Taylor sent to the Reagans pleading with Ronald Reagan to speak at the American Foundation for AIDS Research is dated April 10, 1987.

Why is this important? Because Rock Hudson died of AIDS in October of 1985. Did it really take Nancy Reagan two years to figure out that maybe it was sad that her friend died of a virus her husband couldn’t be bothered to mention? And what of the fact that in 1986, the year after Hudson died, Reagan’s proposed federal budget actually called for an $11 million decrease to AIDS research funding?

Perhaps even more importantly — in August of 1885, just eight days before Rock Hudson died, his doctor in Paris sent a telegram to the Reagans, believing that a special request from the White House would help him get into a better hospital. The telegram was addressed to White House staffer Mark Weinberg, who brought it to Nancy Reagan’s attention. 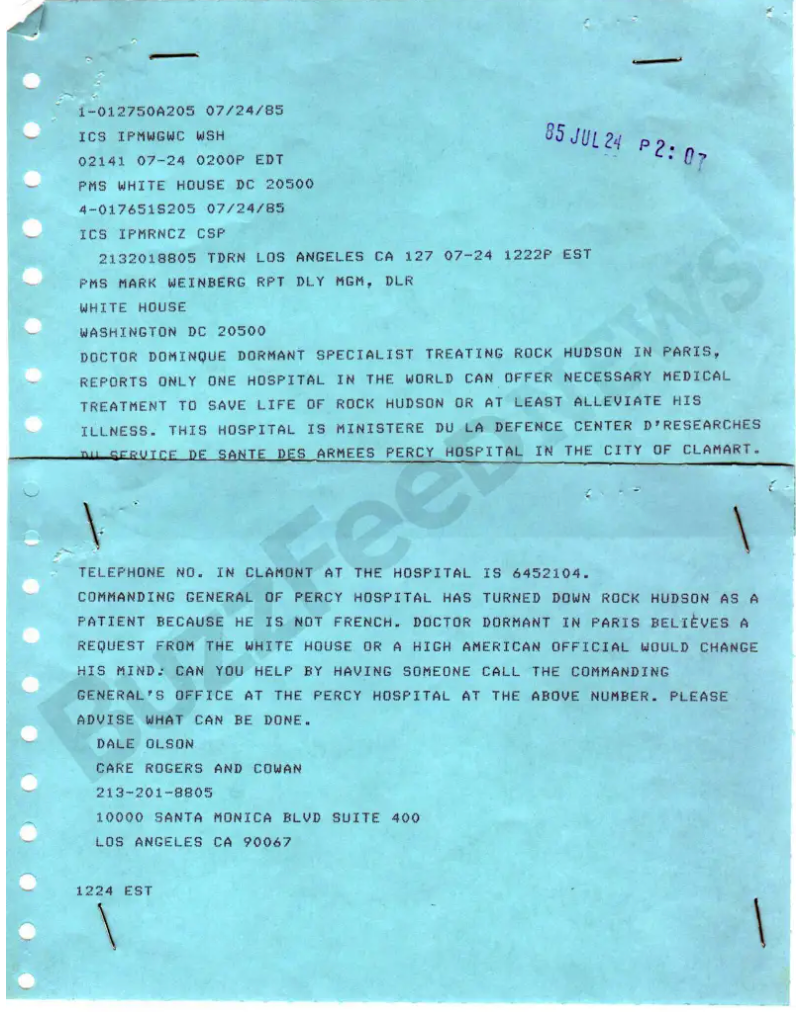 Doctor Dominique Dormant specialist treating Rock Hudson in Paris, reports only one hospital in the world can offer necessary medical treatment to save life of Rock Hudson or at least alleviate his illness. This hospital is Ministere du la Defence Centre d’Researches du Service de Sante des Armees Percy Hospital in the city of Clamart,

Commanding general of Percy Hospital has turned down Rock Hudson as a patient because he is not French. Doctor Dormant in Paris believes a request from the White House or a high American official would change his mind. Can you help by having someone call the commanding general’s office at the Percy Hospital at the above number.

Please advise what can be done.

Nancy Reagan told him: “This is probably not the [last] time we’re going to get a request like this and we want to be fair and not do anything that would appear to favor personal friends.”

Clearly, she did not have much compassion for her dear friend while he was actually dying. If Elizabeth Taylor was able to coax a little out of her in order to get her idiot husband to even say the word “AIDS,” then that’s her victory, not Nancy Reagan’s.

If Nancy Reagan was a hero to anyone, it was astrologers. As Tumulty also mentions in her book, she used her influence over the President to get him to listen to the advice of her astrologer, Joan Quigley. To be fair, astrology is not significantly less made up than the movies Ronald Reagan often thought had really happened to him. Perhaps Nancy Reagan’s well-known reliance on astrologers and psychics gave them the air of legitimacy they needed to make millions scamming Americans with 1-900 numbers throughout the next couple decades. If anyone owes her a debt of gratitude, it’s them.